A friend of mine recently mentioned to me that they had never before used the lists feature on Twitter. I was surprised, to say the least. I had always been under the impression that this feature was well-used, but after speaking to several fellow Twitter-using business owners, I learned this was not the case. That being said, I wanted to write up a quick post regarding the benefits of utilizing Twitter’s list feature for businesses. 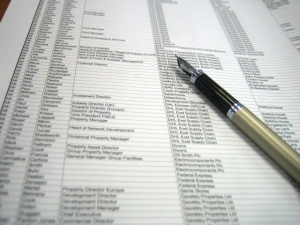 Twitter’s list feature is a method by which users can organize their followers, or users that they are following. When you click on a list you have created, only the tweets from those users on that list will be displayed. In this way, your feeds are more organized and less daunting to pick through.

How Can Your Business Benefit?

Aside from saving your media manager time sorting through the mass of tweets sent out on a daily basis, using the lists feature allows you to separate users into different categories. For instance, one list could be reserved for local businesses, another for out of state businesses, and a third for businesses located in other countries. A printing company might opt to sort the Twitter accounts of potential clients into their associated service sectors. The upcoming graphic designer could keep track of upcoming deals from various print shops by putting these shops into lists. As an added benefit, users have the option to make their lists public or private, meaning that the accounts you include won’t even know they are included unless you allow it. Keeping tabs on the competition without letting them know you’re doing so? Now that’s a sweet deal!

Moving beyond the obvious benefits, creating public lists is another way to drive traffic to your account and your business in general. Your business can subscribe to other lists, and users can subscribe to the lists you create. Perhaps your competition has a list of potential clients of their own, viewable to the public–subscribe to this list, and their list is now yours, saving you some time and effort searching for your own.

Do you use the lists feature? How have they helped your business?